From floor tile to mini quilt

This month’s sewing has been for an online challenge to make a patchwork block inspired by pictures of tiles.

The house in which I grew up had a tiled hall and I managed to find an old photo of it. I knew the tiles were likely made by Maw & Co of Jackfield and via Google I was able to find an old pattern book of their "Geometric and Roman Mosaics Encaustic Tile Pavements". Looking at the pattern book, it would suggest our hall was pattern number 29 but with a slight variation on the border to make it narrower. 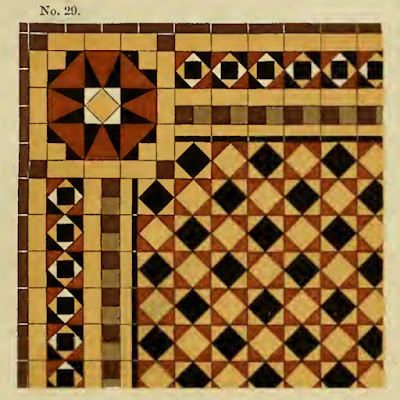 Even though there are various options for a quilt block in the main part of the floor, I decided to make the corner embellishment shown in the pattern book using FPP templates.

Each FPP square finished at 2” and were not too complicated to make. However, there was quite a bit of cursing and unpicking after I had sewn the squares together and realised that blocks with long black triangles were facing the wrong way. 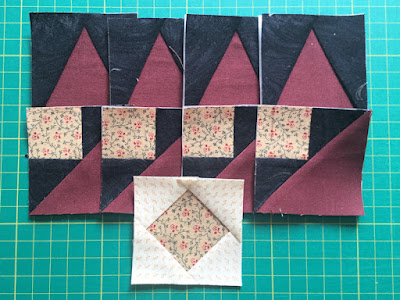 Once everything was facing the correct way, I added a 1” border and quilted it using stitching nearly in the ditch. With a half inch binding, the finished size is ~9”. (While looking at the photo of the hall floor for this project, I spotted a mistake in the border tiles that must have been there since the floor was laid, but went unnoticed all the time I was living there.)

Posted by SewLittleToSay at 14:41 No comments:

Tea for the Jubilee

I recently took part in an online Jubilee sewing challenge which had the theme of “British” and “Royalty”. After a bit of thinking, I decided to make a tea set given that a cup of tea is often associated with “Britishness”. 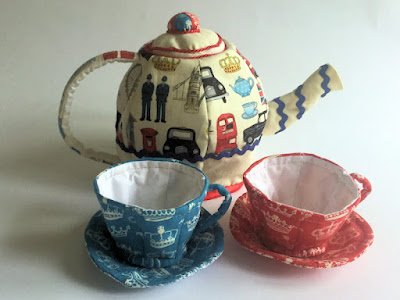 I found a free teapot pattern on Youtube, but I had just three pieces of fabric with a London or red/white/blue royal theme and each were only ~24cm square. 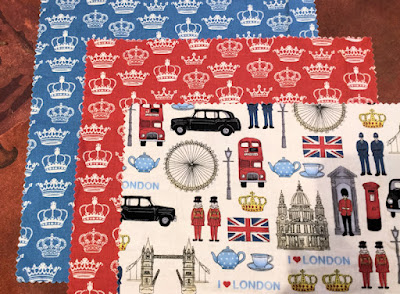 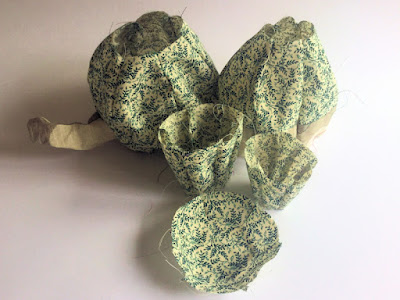 To make the teapot and teacups stand up, I used two layers of cotton and one layer of quilting batting. Some additional interfacing was used in the teapot lid and piping cord was added to the handles. The binding and decorations on the teapot were chosen to reflect a red, white and blue theme. 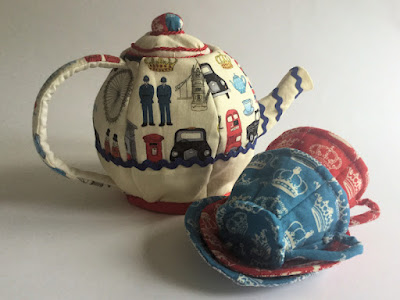 These were quite fun to make, but fiddly in parts and now I have no idea what to do with them.

Posted by SewLittleToSay at 15:00 No comments:

Email ThisBlogThis!Share to TwitterShare to FacebookShare to Pinterest
Labels: sewing

The criss-cross quilt is finished, washed and ready to go to Project Linus. 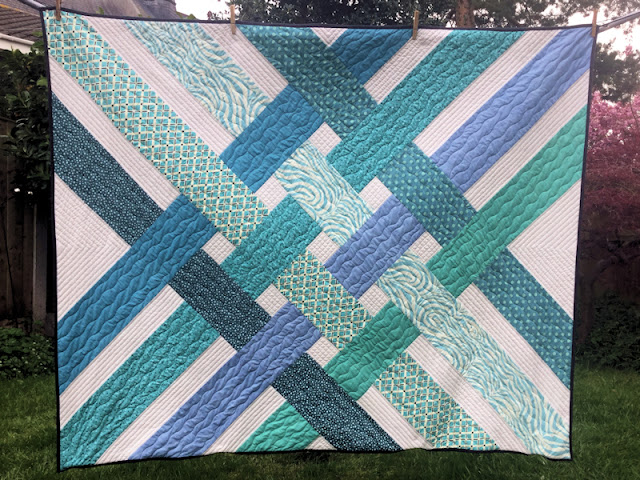 As expected, my plans to use some free motion quilting in the criss-cross sections changed and I used a serpentine stitch instead, using different colours of thread to match with the different fabrics. I didn’t want the rows of stitching to run parallel to each other, so I changed the stitch length on every other row which helped make them out of sync. 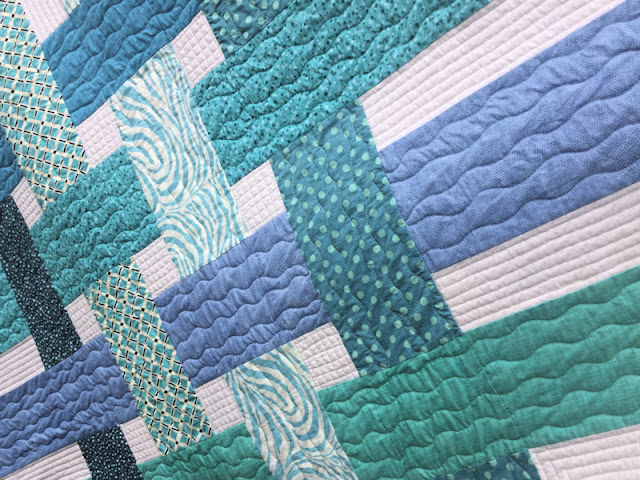 I’m really pleased with the texture of the quilting and the contrasting styles, which shows up particularly well on the back of the quilt. 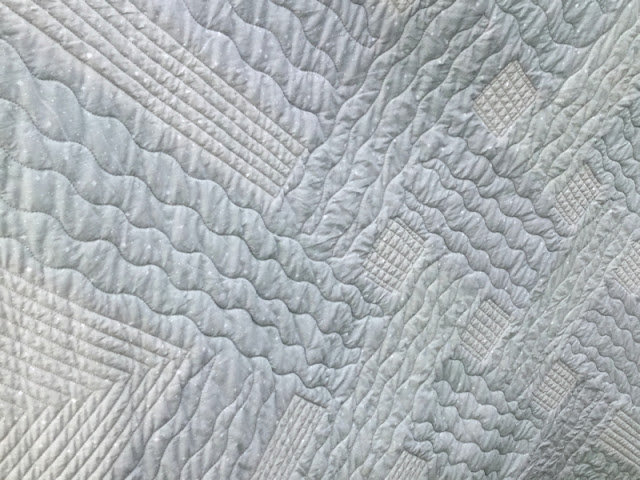 Now I need to decide on what to start next.

Posted by SewLittleToSay at 15:46 No comments:

I was a bit optimistic when I thought I might manage to finish the quilting and binding this month. However, progress has been made and the grey sections have been quilted with straight line stitching.

My stash of Aurifil 40wt was lacking in the right colours for the criss-cross sections but fortunately they do a “Colour Builder” collection which has three very useful colours for this quilt. 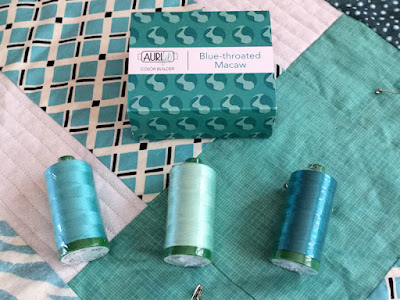 I think I might try some free motion quilting in the criss-cross sections, but like most of my plans, this may be subject to change.

Posted by SewLittleToSay at 17:09 No comments:

A flurry of activity during one weekend saw good progress being made on the Criss-Cross quilt. There was some sewing followed by lots of pinning resulting in a sandwiched quilt. 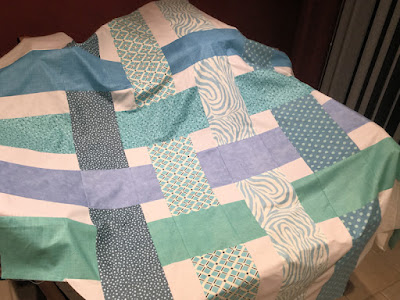 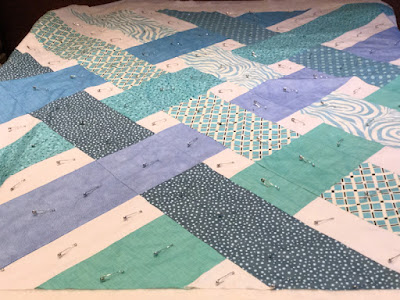 Hopefully next month will be a time for quilting and binding.

Posted by SewLittleToSay at 14:24 No comments:

January started with some rummaging around in my stash to try to find eight fabrics, a backing and a binding to make a criss-cross woven effect quilt. 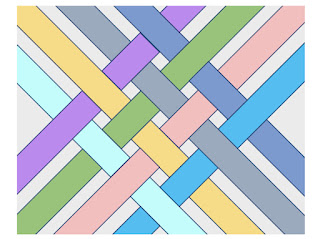 After supplementing what I found in my stash with a couple of on-line purchases, I thought I was ready to go, but when I laid out the fabrics on the bed, one of them didn’t look quite right. 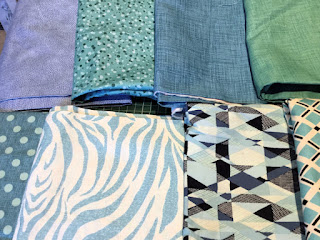 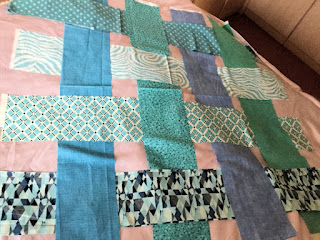 Luckily, I had the chance to visit a bricks and mortar fabric shop at the weekend and found an alternative that is a much better option. 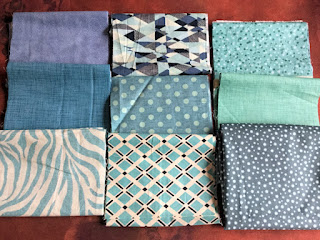 The geometric print (top row middle) will be replaced by the new dotty print (bottom row right). However, when the quilt is made and handed to Project Linus, the recipient is in for a surprise as the new fabric glows in the dark!

Posted by SewLittleToSay at 10:28 No comments:

In my sewing summary post for last year I said “2020 was definitely an odd year and I do hope that 2021 is not going to be a repeat.”. Well, I got that wrong!

Sewing-wise there have been no masks this year and has been a mix of quilts, garments, accessories and has included: 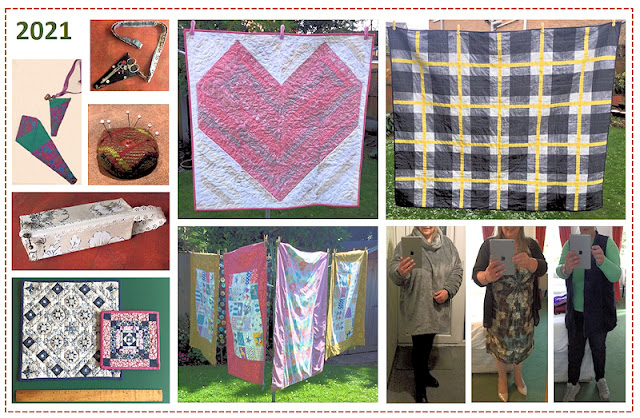 One bright spot in 2021 was that sewing shows were able to return from the summer. I visited Festival of Quilts and found a very different type of show – quiet and spacious. I think my only in-person sewing purchases for this year were made at the show. As I’m still working from home, my lunchtime trips to Abakhan Fabrics are no more, for which my stash and purse are probably grateful.

After the past two years, somehow I expect 2022 will be more of the same (at least we are all getting used to it now), though it would be nice to be proved wrong on this.

Posted by SewLittleToSay at 14:30 No comments:

SewLittleToSay
United Kingdom
I enjoy a variety of sewing (dressmaking, patchwork, quilting) but should really spend less time on the internet reading about sewing and more time actually sewing. Find me on Twitter and Instagram as @sewlittletosay.